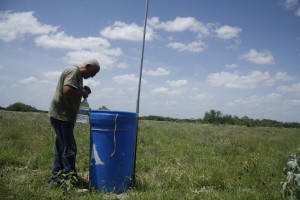 NEAR FALFURRIAS — The sun blazed Tuesday afternoon as Eddie Canales and Anna Ibarra of the South Texas Human Rights Center took turns striking a three-foot metal rod into the ground with a sledge hammer for the first of 12 new water stations.

“Today is important for us because this is the first time we are allowed to set these stations up in this particular ranch,” said Canales, who allowed The Monitor to ride along with him on the condition the name of the ranch was not disclosed.

As the heat index climbed to over 110 degrees, Canales, 68, and Ibarra, 23, stood on the sandy soil of the ranch, which sits next to the U.S. Border Patrol checkpoint, and where hundreds of migrants have died trying to avoid detection.