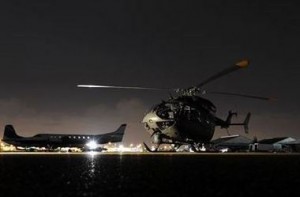 A small contingent from the Alabama National Guard has been ordered to Arizona to help protect the U.S. border with Mexico, Gov. Robert Bentley's office announced Tuesday.

A UH-72 helicopter and three pilots from Alabama will be serving in Marana, Arizona. The move comes at the request of the National Guard Bureau, Bentley's office said.

"Securing the U.S. border is an issue that is important to every American, and the Alabama National Guard is supporting the effort to secure the border," Bentley said in a written statement. "The men and women who serve in the Alabama National Guard are some of the most dedicated and professional military service members in the country.  I appreciate the Guard's effort to support the Southwest Border Mission."

The crew will remain in Arizona through September. The deployment also provides training opportunities for participants, according to Alabama National Guard Major Perry Smith.

"These missions provide enhanced training for our pilots, while at the same time providing strengthened borders to protect the nation," he said.

National Guard aviation crews from around the country have served at the U.S./Mexico border since 2012, mostly providing air support to U.S. Customs and Border Protection in what's known as "Operation Phalanx." Among the crew's task will be the identification and observation of undocumented immigrants, the seizure of illegal narcotics and assistance with any emergency operations.