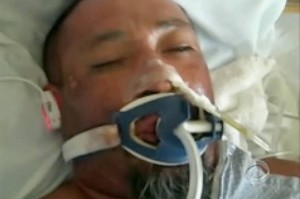 The family of a longtime U.S. resident is suing the government on charges of torture and excessive force, but the case has gotten very little coverage in the American media.

Anastasio Hernández Rojas, 42, died after being beaten by U.S. Border Patrol agents in May 2010. The father of five U.S.-born children had lived in San Diego for 25 years before he was deported. He was attempting to illegally cross back over the California-Mexico border and was on the U.S. side, in hopes of reuniting with his family, when he was stopped by agents from U.S. Customs and Border Protection, or CBP.

Instead of re-deporting Hernández Rojas, the CBP agents brutally beat and tasered the 42-year-old father as he lay on the ground in handcuffs, pleading for his life. Witnesses captured video of the horrific killing, although Border Patrol agents tried to destroy the evidence, according to his family’s lawyer.