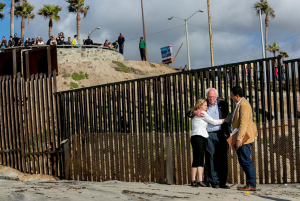 May 22,2016 (San Diego) -- The Democratic presidential candidates’ campaigns both held rallies and other events in the San Diego region over the weekend in anticipation of California’s June 7th primary.

Senator Bernie Sanders drew about 10,000 people at a rally at Kimball Park in National City on Saturday, the San Diego Union-Tribune estimates. On Sunday, he held a second rally at a high school in Vista.  Earlier, he toured Friendship Park at the international border, a meeting place for separated families between San Diego and Tijuana.