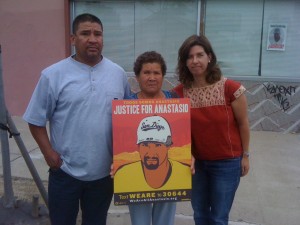 The board is set to review the 2010 death of Anastasio Hernandez Rojas, who died after a confrontation with border agents at the San Ysidro Port of Entry.

U.S. Customs and Border Protection’s Use of Force Review Board today will look into the case of Anastasio Hernandez Rojas, who died in 2010 after being beaten and shocked with a Taser during a confrontation with border agents.

Hernandez Rojas was apprehended at the San Ysidro Port of Entry allegedly for attempting to cross the border illegally. He died a few days after his arrest.

Border Patrol agents have said Hernandez Rojas was combative and that it was necessary to subdue him, according to court documents. An autopsy found that drugs and a heart condition contributed to his death.

The review board was created by CBP Commissioner Gil Kerlikowske to investigate use-of-force claims as a way to identify potential reforms or cases that violate CBP policy. The board can make recommendations to the Inspector General and to Kerlikowske regarding proper equipment or training, policy changes and disciplinary action.

“The agency charged with protecting our communities has one last chance to make the right decision and hold their agents accountable for their brutal actions,” Maria Puga, the widow of Hernandez Rojas, said Wednesday. “We urge the Use of Force Review Board to bend toward justice and immediately resolve our cases by holding those involved accountable for any misconduct that occurred and for the untimely death of our loved ones.”

Today’s review comes four months after the Department of Justice announced it would not file criminal charges against the federal officers involved in Hernandez Rojas’ death.

The decision sparked outrage among family members and local immigrant rights groups, who argue that agents used excessive and unwarranted force against Hernandez Rojas, who was in handcuffs during part of the altercation.

For several years, activists have called on CBP for greater accountability and transparency within the agency and in investigating use-of-force incidents. Among their demands is equipping Border Patrol agents and officers with body-worn cameras.