Can the Labor Movement Live With Police Unions? 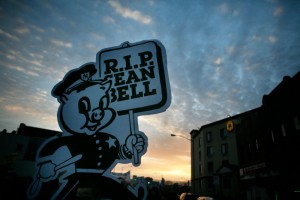 Is there room in the labor movement for racist, Trump-supporting cops?

The single most loathsome figure associated with the NYPD is the head of its police union, who staunchly defends bad cops and fights reforms with inflammatory rhetoric. As the nationwide drumbeat of police killings and subsequent protests have grown in the past year or two, so too have calls—both formal and informal—for labor organizations to divorce themselves from unions of police and other law enforcement officers. The AFL-CIO has been asked to kick out the International Union of Police Associations. Last week, an immigrant activist group asked the AFL-CIO to kick out the National Border Patrol Council, a union of U.S. Border Patrol agents, after the union endorsed Donald Trump for president.

So far, the AFL-CIO has demurred. But the impulse to cast the cops out into the wilderness will not die out any time soon, as long as police unions serve as the primary institutions defending the behavior of racist, violent, or corrupt cops. Police unions do the things that unions are supposed to do (negotiate and enforce better pay and working conditions for their members), but some of them, at least, also do the thing that makes many people despise unions (protect bad actors at all costs).