Border Report: No Homecoming Yet for Deported Vets 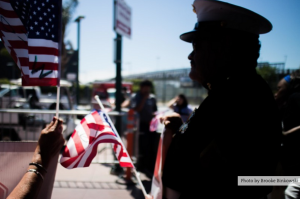 The small crowd waited anxiously at the Port of Entry in San Ysidro, holding signs and American flags.

The group on the U.S. side of the border was waiting for news from several deported veterans of the United States military who had turned themselves in en masse to U.S. Customs and Border Protection to request humanitarian and medical asylum.

The event was preceded by a damning report from the American Civil Liberties Union, which concluded that the United States had failed military members by not helping them become citizens.