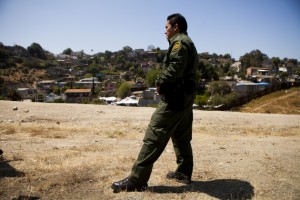 Border Patrol agents’ shootings of individuals who throw rocks at them follow “an astonishing pattern,” a report reveals.

The findings by a Justice Department official are part of a federal lawsuit brought by the family of José Alfredo Yañez Reyes, who was shot and killed by Border Patrol agents in June 2011 as he tried to flee into Mexico.

Per The Center for Investigative Reporting:

“Virtually all thrown objects fail to meet the ‘Imminent Peril’ standard to justify use of deadly force, and in such circumstances, officers are trained to take evasive or defensive action, not escalate the encounter with gunfire,” Thomas Frazier wrote in his report. … “In my experience I have never heard of, and do not know of, any law enforcement agency that considers a thrown projectile as per se ‘Deadly Force.’ …

While echoing other reports and assessments about use of force by Customs and Border Protection personnel, some of which have been madepublic, Frazier’s report on the Border Patrol goes further, laying specific blame and offering a stinging critique. Frazier concluded that the agency’s top leader, Michael J. Fisher, failed to act and his “indifference is not explainable.” Fisher abruptly retired in November after serving as Border Patrol chief since 2010.

The New York Times Magazine, meanwhile, has a gripping story 2surrounding the circumstances that led to the shooting of an unarmed teen, José Antonio Elena Rodríguez, who was killed in Nogales, Mexico, by a Border Patrol agent standing on the Arizona side. Those agents, too, claimed the teenager had been throwing rocks that endangered officers. But serious doubts have been cast on that account:

Before the autopsy report was publicly released, official accounts of José Antonio’s death had already begun to unravel. A person merely had to stand at the stretch of border fence where the shooting occurred and take in the view. That particular section of fence is 20 feet tall, but it sits on a rocky cliff, and the drop into Mexico from the base of the fence is another 25 feet. From Calle Internacional, hurling rocks over the top of the fence — or through the narrow gaps between the slats, which are only three and a half inches wide — would seem to be all but impossible. ‘‘It’s abundantly clear,’’ [James F. Tomsheck U.S. Customs and Border Protection’s internal affairs office chief], who eventually visited the site with the F.B.I., says, ‘‘that there was no potential for José Antonio to have thrown any projectile from where he stood when he was shot that could cause injury on the U.S. side of the border, not even if he were a major-league baseball pitcher.’’

Perhaps it’s unsurprising, then, that local Border Patrol officers are pushing to be outfitted with body cameras that could eliminate doubts about their actions and the actions of those they interact with.

Terence Shigg, the local chapter president of the National Border Patrol Council, told NBC 7 he’s in favor of body cameras so long as they are “implemented correctly with the correct equipment and the correct policies to back that up.”

Customs and Border Patrol recently finished a yearlong study on body cameras, yet is “no closer to rolling out the cameras,” NBC 7 writes.