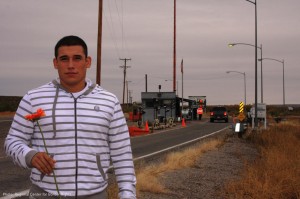 The House Border and Maritime Security Subcommittee will hold a hearing tomorrow, September 13, to discuss Border Patrol’s power grab in the government’s 100-mile border zone. For me, this hearing isn’t about efficiency. This is about my right — and the rights of roughly 200 million Americans — to travel freely and be respected in my community.

Border patrol operates interior checkpoints up to 100 miles into the country where all motorists, without any suspicion of wrongdoing, are forced to answer to armed federal agents. These checkpoints operate based on decades-old rules written at the same time when Border Patrol launched “Operation Wetback.” While the racially biased names for border policing strategies may have changed, their discriminatory legacy lives on.

I’m a U.S. citizen, born and raised in Salem, a small colonia in southern New Mexico. I recently completed my master’s degree in criminal justice from New Mexico State University in Las Cruces, New Mexico, but I didn’t need a textbook to learn what it’s like to drive while brown in border communities.