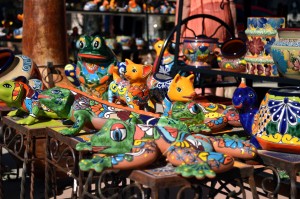 Rainbow-colored telavera animals crowd the outside of Casa Maya de Mexico in the self-described “artist colony” of Tubac where metalwork shaped into suns and moons, paper mache skeletons from Día de los muertos, and wooden religious figures join them.

María Troy, who has worked at Casa Maya de Mexico for the last two years, helps bring many of the goods from Mexico to sell here.

“The clay work comes from Guadalajara, the tile murals and tin lanterns come from San Miguel, and the benches are made in Nogales [Sonora],” Troy says.

Troy, who lives in Mexico and comes to Tubac for her job, works at one of the many shops and galleries in the town that devote their space to promoting Mexican folk art.

The craftwork, known as artesanía in Mexico, gives voice to Mexican heritage across Southern Arizona and all over the world.

The Heart of Mexico

Artesanía refers to traditionally produced Mexican handcrafts and can include anything from ceramic sculptures and metalwork, to pottery and tile work.

According to Pawlak, artesanía is the combination of pre-Columbian traditions such as the Aztecs and Mayans, with Catholicism, which came during Spanish colonization.

Mexican folk art, especially early examples, are considered art because of the “creative process in which the artist is engaged to create unique designs,” Pawlak says. Although many Westerners might see some of the art as crafts, Pawlak points out that it doesn’t follow the Western standards of art.

Mexican folk art can be decorative or used in daily life, such as with pottery and glassware. Artesanía also has an important role in Mexican and Catholic holidays.

The most well-known artesanía holiday is Día de los muertos, or Day of the Dead, which is held the first of November. The festival celebrates deceased loved ones, and participants will often put out skeletal-themed folk art at gravesites or private altars called ofrendas.

According to Pawlak, Easter and other religious holidays are also notable traditions where people will decorate altars or their homes with carvings, paintings and mosaics. 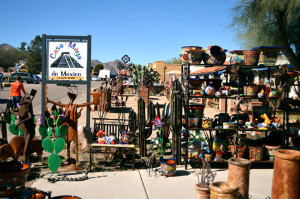 Unfortunately, the tradition of producing artisan folk art is dying out due to the large factories that mass-produce the goods for the major holidays.

“It’s hard to make a lot money when there are factories that are able to produce larger quantities for events like Día de los muertos,” Pawlak says.

In Mexico, according to María Troy, folk art is primarily made by the rural and poor social class. Because of this, there is great variation of goods by region, however, the costs to produce and ship goods can’t be met through traditional methods.

This has caused artisan families to move to urban areas and give up the trade, thus the influx of large companies mass-producing artesanía.

Despite this, the local production of artesanía is still deeply rooted into Mexican culture, especially dance, Kevin Pawlak says.

“There is a wide variation of props, costumes and masks, which can be carved from wood, fired from clay, or hand-woven depending on where you are in Mexico,” Pawlak says.

“[Artesanía] is the history, blood and heart of Mexico,” Pawlak says. “There is no other country where there is so much diversity of art in the different regions.”