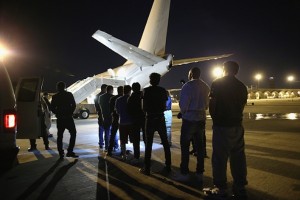 LAS CRUCES, NM— Today, civil and human rights organizations in Mexico and the United States filed a complaint with the U.S. Department of Homeland Security (DHS) on behalf of 26 people. Immigration officials confiscated and failed to return the people’s personal belongings, exposing them to severe risk of harm upon their return to Mexico. The complaint shows how U.S. Customs and Border Protection (CBP) and Immigration and Customs Enforcement (ICE) officials in the El Paso Border Patrol Sector—which covers West Texas and all of New Mexico—routinely dispossess people of their personal belongings, deporting them to Mexico without money, identification and legal documents, mobile phones, and other important personal possessions.

“Deporting people without their personal belongings isn’t just wrong, it’s cruel,” said Vicki B. Gaubeca, director of the ACLU of New Mexico Regional Center for Border Rights in Las Cruces, New Mexico. “Imagine being abandoned a thousand miles from home without money, ID, or a cell phone. We as Americans need to stop the wholesale robbery of people, and start treating noncitizens with the same dignity and humanity that we would want for ourselves.”

The ACLU of New Mexico Regional Center for Border Rights, the ACLU of Texas, the American Immigration Council, the Programa de Defensa e Incidencia Binacional, the National Immigration Project of the National Lawyers Guild, Derechos Humanos Integrales en Acción, A.C., El Centro de Recursos para Migrantes, the Kino Border Initiative, and Senda de Vida filed the administrative complaint today with the DHS Office of Inspector General, the CBP Office of Professional Responsibility, and the ICE Office of Professional Responsibility. The complaint details how CBP and ICE take individuals’ belongings and do not provide an effective process to reclaim them. When people try to reclaim their belongings, some agents have responded by threatening them with more detention time. These abuses persist despite recent national policy changes on belongings within CBP. A recent report showed that the U.S. government deports as many as one in three people to Mexico without their personal belongings.

“For years, we have documented the grave consequences that noncitizens face when the U.S. government deports them to Mexico without their belongings,” said Blanca Navarrete, the Director of the Programa de Defensa e Incidencia Binacional, in Ciudad Juárez, Chihuahua. “Without money, voter cards and other identification, cellular phones, and warm clothes, these individuals struggle to return to their home communities from the border. Many continue to struggle when they return home and cannot obtain work without identity documents. The Mexican voter card is particularly important because it is the primary means that people in Mexico use to prove their identity and it requires multiple original identity documents to replace.”

“The numerous case examples in this complaint underscore the failure of the existing policies and procedures,” said Mary Kenney, Senior Attorney with the American Immigration Council. “DHS and CBP must adopt procedures that work – procedures that will ensure that an individual is able to retrieve his or her belongings before being removed to Mexico.”

The complaint details the experiences of 26 people whom the U.S. government deported to Mexico without their personal belongings in 2015 and 2016:

“Mass dispossession is abusive and systemic in border regions,” said Trina Realmuto, Litigation Director at the National Immigration Project of the National Lawyers Guild. “Stealing another person’s property is not just unconstitutional, it’s criminal. DHS must investigate and change its policies regarding the retention and return of personal belongings, and it must start holding accountable agents who abuse these policies.”

“DHS should take a serious look into its agencies’ policies and practices that dispossess noncitizens, including asylum seekers, of their most basic belongings, like the clothes on their backs and the change in their pockets,” said Edgar Saldivar, Senior Staff Attorney of the ACLU Foundation of Texas. “Shaking down poor individuals and depriving them of their valuables prior to deporting them is inconsistent with our values and the Constitutional principles we hold dearly.”

The complaint urges that DHS oversight agencies should promptly investigate the cases of abuse documented in the complaint. The complaint also recommends that DHS reform its policies and practices to ensure that all belongings are returned to migrants at the moment of their release or repatriation, consistent with repatriation agreements that DHS and the government of Mexico signed in February 2016.