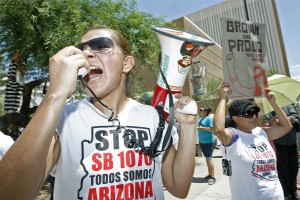 American Civil Liberties Union of Arizona said Monday its review of Tucson police records found the department is, with help from the Border Patrol, prolonging traffic stops beyond necessary to check the immigration status of people it stops.

The ACLU alleges the extended stops are constitutional violations and go beyond a requirement in Arizona's SB 1070 law that officers make a "reasonable attempt" to determine immigration status.

The group said those stops happened in about 85 of the 110 cases it reviewed in records dating from June 2014 to December 2015. The records were obtained through an open government request.