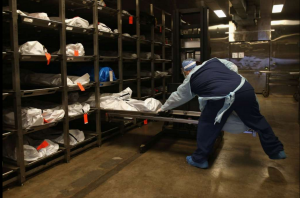 Handmade rosaries, letters to loved ones and jewelry attached to the skeletal remains of immigrants who attempted to cross into the U.S. on foot are sometimes the only clues forensic anthropologists in Tuscon have in identifying bodies found by border agents and ranchers to return them to families.

A series of Getty photos released last week and in December 2014 provide a glimpse into operations at the Pima County Medical Examiner's Office, which has reportedly seen an uptick in the intake of suspected illegal immigrants who died while attempting to cross the Sonoran Desert into Arizona without a visa. Most die of dehydration.