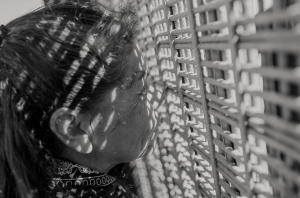 Families too often are divided by U.S. immigration policies, but on a small patch of land that straddles the U.S.-Mexico border, separated families can reunite, at least for a few hours.

The patch of land is actually two parks, Playas de Tijuana, in Mexico, and Friendship Park directly across from it in San Diego County.

On weekends, Friendship Park opens its gates for four hours to families from around the country to visit with friends and relatives in Mexico. They are allowed through the outer fence to visit though a secondary fence.

A mother can talk with her son, who was deported years ago. Grandparents can connect with their grandchildren, perhaps for the last time. A dad can spend time with his toddler-aged son.

These visits to the park have become a part of the regular routine for some families who are separated by the border.

On the U.S. side, visits, however, are under the supervision of Border Patrol agents, who keep a close eye on the park. Visitors are not supposed to hold hands, embrace, or make contact through the fence. They often cannot see each other too well through tightly woven grates in the wall.

After a couple embraced through a narrow opening in the wall in February, the park was shut down.

Even with these restrictions, families travel from around the country to Friendship Park to connect and share news. Over the years, a community has grown around the two parks, which is home to the Binational Friendship Garden of Native Plants, morning yoga classes and a beach.

“The wall represents this fractured society, the separation of the family network, a breakdown of the values we should have not only in this country, but how we should treat each other as human beings,” said Pedro Rios, who leads visits to the park and runs run the San Diego U.S.-Mexico Border Program, which is part of the American Friends Service Committee.

Families have been coming to the park for more than a century. Over the years, however, the border has slowly become more tightly controlled. Initially an unsecured area, the U.S. ran barbed wire across the border after World War II, according to a history of the park by Friends of Friendship Park.

Despite these walls, Friendship Park offers some hope for the future of immigration policy, which has been marked by divisive debates and controversial ideas in recent months. On the presidential campaign trail, candidates have called for new restrictions on immigrants, and Republican frontrunner Donald Trump has proposed building a new wall along the U.S.-Mexico border.

In June, the Supreme Court is expected to rule on President Barack Obama’s Deferred Action for Parents (DAPA) plan and his expansion of the Deferred Action for Childhood Arrivals (DACA) program. Rulings by lower courts suspended the programs, and the high court could hear arguments next month.

Friends of Friendship Park, meanwhile, are working on plans to make the park more accessible, including restoring a road to the park that often washes out during the winter, forcing visitors to walk more than a mile.

These changes could begin transforming a symbol of border security into a place of family.