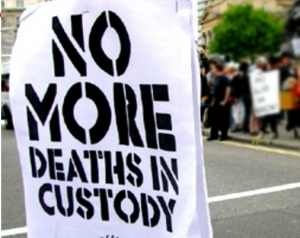 In a letter sent yesterday, the organizations responded to DOJ’s proposal for implementing the Deaths in Custody Reporting Act (DICRA), which requires police departments across the country to disclose details to the federal government about custodial deaths. DICRA was signed into law in 2014 in response to a troubling lack of reliable data on these deaths and DOJ is currently collecting comments on its implementation proposal that was published August 4, 2016. The comment period will close on October 3, 2016. Signers include The Leadership Conference on Civil and Human Rights, the ACLU, the NAACP Legal Defense and Educational Fund, the United Methodist Church, the National Immigration Law Center, the National LGBTQ Task Force, the Southern Poverty Law Center, among many others.

In their letter, the organizations list a number of deficiencies in the proposal that are a “departure” from DICRA, including a lack of accountability to ensure state and local police are actually reporting the data; a failure to condition federal funding on adequate reporting; a disturbing reliance on media reports instead of police departments for data; a lack of clarity on how DICRA applies to federal agencies; and the absence of a clear definition of the word “custody.”

The groups are especially concerned about the lack of consequences for not reporting accurate data because “voluntary reporting programs on police-community encounters have failed. Only 224 of the more than 18,000 law enforcement agencies reported about 444 fatal police shootings to the Federal Bureau of Investigation (FBI) in 2014, though we have reason to believe that annual numbers of people killed by police exceeds 1,000.”

“The loopholes in these regulations are cavernous,” said Wade Henderson, president and CEO of The Leadership Conference on Civil and Human Rights. “You can’t fix what you can’t measure. Police departments should report deaths in custody when they happen; it should be that simple. But these regulations make it clear that DOJ would rather bend over backwards to accommodate police departments’ dysfunction or reluctance. There should be simple procedures so that police can provide complete and accurate data or face clear consequences for non-compliance.”

“Relying on news coverage for the data reporting work of departments is especially problematic,” Henderson continued. “Newsrooms are shrinking across the country and – now more than ever— it’s the government that should be providing journalists with transparent data, not the other way around.”

The groups also want the regulations to include a broader range of potential areas of police misconduct. “To achieve complete and uniform data collection and reporting, the federal government must solicit disaggregated data that is reflective of all police-civilian encounters, including those encounters with people of color, women, and people with disabilities. Data concerning sexual assault and misconduct by law enforcement agents should also be collected and reported,” they said.

The letter and a complete list of signers is linked here and pasted below.