Stopping the border deaths: towards freedom of migration for all 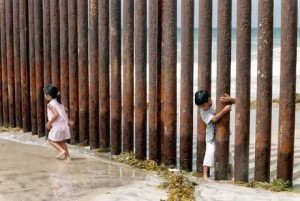 International borders have become deadly barriers, rivaled only by war and major natural disasters in the number of fatalities they produce. The consortium ‘The Migrants’ Files’ has recorded more than 3,000 deadly incidents between 2000 and early 2016, during which an estimated 32,000 men, women, and children died or went missing while trying to reach Europe.

In Australia the ‘Border Deaths database’, maintained by the Border Crossing Observatory at Monash University, has counted almost 2,000 deaths in the same period. Still more migrants have died in the deserts of Arizona and New Mexico, and in the jungles of southeast Asia. Nobody knows exactly how many people have died, because many deaths are unseen or undocumented.

What do we needed to do to stop these deaths? Ad hoc reactions by governments have ranged from trying to stop ruthless smugglers to militarising borders and immobilising migrants by detaining them. However, these reactions are part of the problem because migrants take ever greater risks – including the risk of death – to circumvent them. Answers to the question of how to stop migrant deaths requires us to look beyond ad hoc policy responses and explore more far-reaching and utopian possibilities.

A possible starting position for a search for answers is this simple caveat: all humans should be able to migrate freely. This is not a far-fetched position. The political theorist Hannah Arendt called freedom of mobility “the oldest and also most elementary” form of freedom. It is also an essential prerequisite for being a political actor.

There are different ways in which forward-looking activists and scholars have thought about achieving freedom of migration for everyone.

One idea is open borders. This idea has proponents from various ideological camps. Liberal theorists, who reject birth privilege, support open borders because they would treat everyone the same independent of the country in which a person was born. Free-market economists argue that labour – similar to money and goods – should be able to move freely across borders; otherwise the global labour market is artificially distorted. Marxists observe that corporations use borders to divide and conquer a global labour force and thus see open borders as an opportunity for workers to organise internationally. Anti-racist groups promote open borders to combat global apartheid. Religious and faith-based positions also support open border arguments.

Philosophically, the idea of open borders is not easy to dismiss due to its support from across the political spectrum.

A more radical idea is described by the call for ‘no border’. This idea assumes that borders have the inherent propensity to oppress and should therefore be abolished. Rallying chants like “no nation, no border, fight law and order” express this goal. Correspondingly, no-border advocates, such as Bridget Anderson, Nandita Sharma and Cynthia Wright, challenge “nation states’ sovereign right to control people’s mobility [and signal] a new sort of liberatory project, one with new ideas of ‘society’ and one aimed at creating new social actors not identified with nationalist projects”.

Open borders vs. no border

There is an important difference between the ideas of open borders and no border. Open borders assume that the political world order remains basically the way it is today, with the surface of the globe subdivided into territorial nation states. However, in the open-borders world, all people are free to cross national borders and migrate from one national territory to another.

A no-border world, on the other hand, is not easy to imagine. Our geopolitical imagination tends to entrap us in the taken-for-granted notion that bordered nation states (or clusters of nation states, such as the member states of Europe’s Schengen area) define who we are and where we belong, and where we can go and settle.

In spite of their differences, open borders and no border are complementary ideas because they raise the prospect of different types of possibilities. One of these possibilities we can imagine, given the Westphalian world order of territorial nation states; the other possibility lies beyond our imagination.

Open borders and no border ideas do not describe utopias in the conventional sense. Ever since Thomas More coined the term in his 1516 treatise Utopia, the idea has described a concrete world in which things were different from the actual world. More’s utopia, for example, was a distant island with no private property, religious co-existence, a structured workday as well as slavery.

Open border and no border ideas do not offer concrete images or blueprints of alternative worlds. They merely critique restrictions of cross border migration and existing bordering practices. They leave the outcome of what happens if we open borders or abolish borders altogether open.

This ambiguity is not a flaw in the concept, as settling on a concrete alternative is not the point. The critical theorist Theodor W. Adorno has taught us that translating critique into a concrete alternative is an exercise that is necessarily ideological. In other words, contemplating the future always occurs using the vocabulary and ways of thinking that we have available to us today. We cannot imagine a radically different future by using today’s vocabulary and ways of thinking.

How do the critiques of open borders and no border help bring about a radically different world, in which border deaths no longer occur, without offering concrete alternatives? Radical change is rarely initiated by academic musing. Rather, it emerges from action and collective practice.

In fact, activist practices evoke the possibilities of both open borders and no border simultaneously. Around the world, activists are providing immediate relief to migrants, ranging from helping them cross borders in safe ways, to hiding them from authorities or fighting legal cases against deportation. They are also pressuring politicians to open borders to migrants in need. At the same time, they are challenging the vocabulary and ways of thinking that distinguish people as migrants, and they reject the ideologies that frame people as non-belonging and that justify having borders and closing them.

In Harsha Walia’s book Undoing Border Imperialism, activist Syed Khalid Hussan summarised this strategy as follows: “we must show that what we bring is both a vision for the future and a way to make things a little better in the present”.

To stop the border deaths we must not wait for utopia, but the utopian possibility can inspire us to take action today.

Harald Bauder is the founding Academic Director of the Ryerson Centre for Immigration and Settlement at Ryerson University in Toronto, Canada, where he is a Professor. His new book Migration Borders Freedom will be published by Routledge in the summer of 2016.