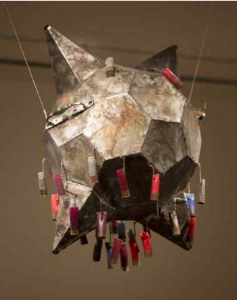 The facts and figures are precise in the brochure and wall text for "Border Cantos," the new exhibit of photographs and handcrafted musical instruments at the San Jose Museum of Art:

The border between the United StateUs and Mexico is 1,969 miles long. A fence covers about 700 of those miles. During a northward surge of minors in 2013 and 2014, U.S. authorities apprehended 52,193 children.

But what does it feel like to actually be there? Are there traces of those children's journey? Some of the answers are in this straightforward but almost metaphysical collaboration by Berkeley photographer Richard Misrach and Oakland composer Guillermo Galindo.

"Border Cantos," which continues through July 31, includes just a couple of photographs showing people, seen through the fence from the California side of the border.

But the presence -- and absence -- of thousands of migrants is everywhere in Misrach's haunting images and Galindo's musical instruments, crafted from items they found along the border, from shirts and children's shoes to combs and water bottles.

Misrach considers the story told by the belongings left behind, which he also photographed, to be a tragic one.

Galindo feels they are sacred objects, and he has brought them to life with remarkable ingenuity. A dusty water bottle is partly filled with gravel to become a rattle. A "shell piata" is inspired by a soccer ball left on the border, with discarded Border Patrol shotgun shell casings as noisemakers.

An entire gallery is filled with Galindo's hand-crafted instruments. One is like a Japanese stringed koto; another turns bottles and cans into a percussion instrument. Galindo has used them all to record a soundtrack heard through speakers in each display, making up the 260-minute-long composition "Sonic Borders."

Misrach's photographs of the border wall are a good place to start this journey, with images so big, more than 6 feet high, that museum visitors can imagine walking right into them.

The wall east of Nogales, Arizona, stretches over undulating hills below a pink sunset. A "Normandy Wall," modeled on the ones facing Allied invaders in France during World War II, snakes along near Ocotillo, California.

A cabbage crop, in neat rows, extends all the way to the wall near Brownsville, Texas. Near Nogales, a patch of sunlight illuminates a portion of the wall and a sandy road. Near Tierra Del Sol, California, the wall cuts through a rocky landscape resembling the movie location for a biblical epic.

These large-scale images are dramatic but unpopulated. Misrach finds the humanity in discarded clothing and shoes left along the migrants' route, and especially in the scarecrow-like effigies made of agave sticks dressed with shirts and pants.

Were the figures meant as stand-ins for missing migrants? Were they warnings? "Haunting and mysterious," he says in added text, "they are a potent introduction to the borderlands, where singular meanings and definite answers can be hard to find."

Misrach suggests the border fence is a futile project. He photographs one small section of the wall that looks like a salesman's sample, with open land on either side. "The absurdity of this situation is clear," he notes, "a fence that contains nothing."

Although "Border Cantos" has been years in the making, it couldn't be more timely as a background for the loud arguments in this election season about extending the wall, paying for it and immigration policy in general.

The museum's executive director, Susan Krane, says in her introduction that Misrach and Galindo "bring a humanitarian perspective to the heated political debates that surround the subject of immigration today." Whether or not "Border Cantos" spurs debate or leads to social and political action, it certainly meets Krane's goal of creating "a shared space for civic engagement."

The collaboration between Misrach and Galindo seems so right, so inevitable, that it's surprising they met by chance. It was in 2011 in San Francisco at a "Pop-Up Magazine" event where artists, writers and musicians got on stage, one by one, to make brief presentations.

Working together became inevitable. "It became a sort of call-and-response," Misrach said. "Once I saw what he could do with these things, I began photographing them where I found them and bringing them back for him."

They have been working together for four years, aiming for a joint exhibit but never expecting it would open in the midst of the current border debate. "That it's coming to the fore right now is uncanny," Misrach said.

"We're artists; we're not politicians," said Galindo. "We want to give people the experience of the border, and to get acquainted with the immigrants' journey. To make it palpable. To make it human."

Galindo considers the clothing, shoes, even books collected by the men to be sacred. "That comes from the theory that in pre-Columbian times, every object was imbued with energy, with our energy," he said. "The sound that these objects make is part of its energy."

Galindo wants museum visitors to come up with their own interpretations.

"In a way, the photos are like my music -- they're meant for the viewer, for the listener, to fill in the spaces on their own terms," he said. "If you have improvised playing music," Galindo said, "the biggest thing you learn is the importance of silence. I want people to see the silences between the sounds."