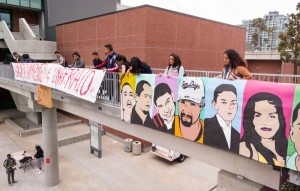 The U.S. Customs and Border Patrol (CPB) did not participate in a campus job fair on Thursday, apparently after City College’s administration cancelled its invitation to do so after a Chicano group announced that it would protest the agency’s presence at school.

Approximately 30 people organized by M.E.Ch.A. (Movimiento Estudiantil Chicana/o de Aztlán) gathered around noon in the AH Quad to protest CBP being invited to participate in the fair.

Enrique Davalos, the Department Chair for Chicano and Chicana Studies at City College, said protesters were aware that the invitation to CBP had been cancelled. However, they still wanted to make a statement to have their voice was heard.