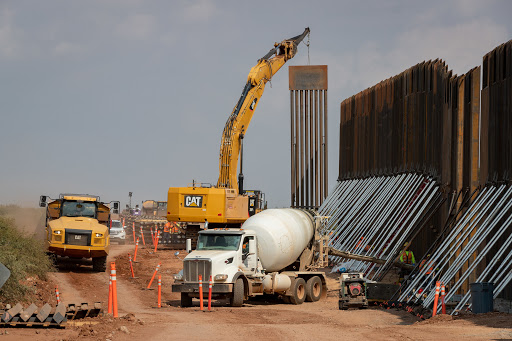 WASHINGTON D.C. — The Supreme Court today stated it will hear arguments in a challenge to the Trump administration’s diversion of $2.5 billion from military pay and pension funds for border wall construction that Congress explicitly denied. The order came in Sierra Club v. Trump, a lawsuit brought by the American Civil Liberties Union on behalf of the Sierra Club and the Southern Border Communities Coalition.

“We’re confident in the strong merits of our case. Trump’s attempts to sidestep Congress is a direct assault on the checks and balances that represent the bedrock of our democracy," said Vicki B. Gaubeca, director of the Southern Border Communities Coalition. "We will continue to push against the further militarization of our communities and for a new border vision that expands public safety, protects human rights, and welcomes all people to our region.”

A district court last year and the Ninth Circuit Court of Appeals in June ruled that President Trump’s attempt to circumvent Congress and transfer $2.5 billion in military pay and pension funds for border wall construction is unlawful. The district court blocked the illegal wall construction, an order that the Ninth Circuit affirmed. However, because of an earlier Supreme Court stay on the district court’s order, the Trump administration has continued construction using funds unauthorized by Congress. Construction of President Trump’s border wall is desecrating ancestral and burial lands, destroying protected landscapes, and threatening wildlife.

The Supreme Court has not yet decided the ultimate outcome of the case, and every lower federal court that has considered the issue has held that Trump’s border wall illegally circumvents Congress’s deliberate decision not to fund the construction. No court has suggested that the Sierra Club and SBCC do not face real injuries from Trump’s actions.

The Trump administration maintains that no injured party — not the ACLU’s clients, not affected states, and not even Congress — can go to court to challenge the administration’s actions. The Ninth Circuit Court of Appeals forcefully rejected that argument in June, warning that “this is a rare case in which the judiciary may have to intervene in determining where the authority lies as between the democratic forces in our scheme of government.” The court concluded that Congress “declined to provide additional funding for projects in other areas, and it declined to provide the full $5.7 billion sought by the President: it is for the courts to enforce Congress’ priorities, and we do so here.”

“Everyone knows that Trump failed to get Congress to fund his xenophobic wall obsession, and every lower court that has considered the case has found that the President has no authority to waste billions of taxpayer dollars on construction. We look forward to making the same case before the Supreme Court and finally putting a stop to the administration’s unconstitutional power grab.”

“The Trump administration has misused military funds for the construction of a wall that has caused lasting harm to the ecosystems and communities of the borderlands, damaged sacred Indigenous lands beyond repair, and destroyed wildlife and habitats along the border. Stopping this wasteful and irreversible damage is long overdue, and we look forward to making our case before the Supreme Court.”