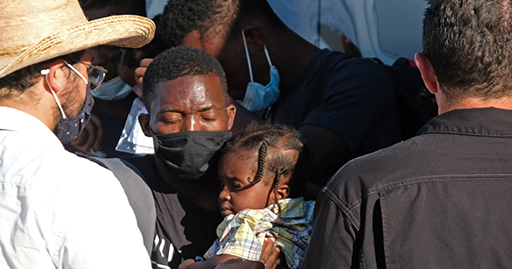 After bearing witness to the vestiges of an encampment that had been cleared hours before their arrival, members of the delegation expressed deep concern and stood united in their call for the Biden administration to communicate the whereabouts and wellbeing of the Haitians moved out of their view. They also called on the administration to stop the deportations and extend protections to Haitians consistent with our moral and legal obligations. Lastly, they called for an independent and impartial investigation of border agents who appear to have violated the civil and human rights of Haitian migrants as part of a long pattern of abuse and impunity at the border.  Central to their collective call to action was the imperative to treat all migrants with dignity and respect.

After the tour, these leaders gathered in a nearby park to relay what they heard, what they saw, and what the Biden administration should do next.

As leaders of the Haitian-American community, we came here to witness the treatment of our sisters and brothers who seek refuge and safety. We came at the invitation of DHS Secretary Mayorkas after meeting with him. What we heard and what we saw troubled us deeply. We call on President Biden to respect the rights of due process and provide humanitarian parole to our Haitian brothers and sisters. Let it be clear, this crisis at the border is the result of failed U.S. foreign policy that has supported corrupt leaders while neglecting the plight of the Haitian people.

The area under the bridge may be empty now but we know the power and the shock of what happened there remains. Our Haitian brothers and sisters may be gone from there but they are not forgotten. The U.S. government must let us know where our brothers and sisters are. These people have families, they have dignity and we need answers.

Under that bridge, it felt empty. It felt like a place of shame and rejection. It felt like the soul of America had been buried. President Biden — stop the deportation of Haitians and restore the dignity and the soul of this country.

President Biden can show good faith by giving Haitian migrants their due process and allowing them to apply for asylum. The administration needs to stop singling out Black immigrants. We want to make sure all immigrants are afforded the same equal treatment as anybody else residing in this country.

The images we witnessed this week were heinous, inhumane and immoral. This should never again happen in this country. We have a mutual obligation to love each other. When you look in the faces of our Haitian brothers and sisters, you can see yourself. May justice be served.

The Biden administration has announced it is investigating the incident in Del Rio. Secretary Mayorkas said that DHS knows how to maintain the integrity of an investigation, but that has never been true. Investigations of Border Patrol have never been independent and free of interference. In the nearly 100 year history of the agency, no agent has been held accountable for lethal use of force, and other uses of force are rampant. We want to see Haitian migrants treated in a dignified way and we want to see our border communities demilitarized.