Deaths, suicides at immigration centers on the rise due to lack of care, report says 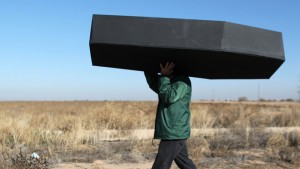 TUCSON, ARIZ. (AP) –  U.S. Immigration and Customs Enforcement has for years provided inadequate medical care at its detention facilities, leading to in-custody deaths, according to a report by a coalition of advocacy groups.

The ACLU, Detention Watch Network and National Immigrant Justice Center examined reports filed by an ICE review board in charge of investigating detention deaths. The coalition examined reports from 2010 to 2012, but advocates say the problem is ongoing and getting worse, especially in Arizona, where a detention center 65 miles south of Phoenix is known as the deadliest in the country.

ICE spokeswoman Yasmeen Pitts O'Keefe said in a statement that several of the detention centers detailed in the report have implemented more rigorous standards.

"U.S. Immigration and Customs Enforcement (ICE) remains committed to providing a safe and humane environment for all those in its custody, including affording access to necessary and appropriate health care. ICE takes the death of any individual that occurs in the agency's custody very seriously. Under ICE's protocols, a detainee death triggers an immediate internal inquiry into the circumstances," Pitts O'Keefe wrote.

The groups focused on eight deaths in which the ICE Office of Detention Oversight found that a contributing cause of death was non-compliance with medical standards.

The report highlighted Pablo Gracida-Conte, a 54-year-old Mexican migrant who died of cardiomyopathy in October 2011 in a Tucson, Arizona, hospital after being transferred from the Eloy Detention Center.

The Office of Detention Oversight found that medical staff had taken too long to call 911 after Gracida-Conte was found experiencing chest pains and other symptoms. It found the staff didn't meet his health care needs in a "timely and efficient manner." Furthermore, advocates say staff didn't try to work with a translator to communicate with Gracida-Conte, who spoke an indigenous language and who had been complaining of symptoms for weeks.

The Eloy Detention Center has reported 14 deaths since 2004, including several suicides.

The death of Jose de Jesus Deniz-Sahagun in May 2015 was declared a suicide. The 31-year-old Mexican immigrant was on suicide watch and monitored because of delusional thoughts and aggressive behavior, according to his autopsy report.

But detainees reported that Deniz-Sahagun had been beaten. His family denies that he was suicidal.

Francisca Porchas, the organizing director at Puente Arizona, an immigrant rights group, said Deniz-Sahagun's family doesn't believe he killed himself just days after presenting himself at the border to seek asylum. Puente Arizona has been a vocal critic of deaths at the Eloy Detention Center.

The family has hired an attorney, who has not responded to a request for comment from The Associated Press.

"It again calls the question that detention centers should be shut down. People are dying, people are neglected, people are being re-traumatized and they're not really serving good. They're dangerous places," Porchas said.

The report's authors also call for a scaling back of detaining immigrants who are awaiting court hearings or deportation and for more transparency from the agency.

Carl Takei, an ACLU attorney, said the lack of information after records requests filed by his organization "raises a number of troubling questions about the willingness of ICE to release information about its own operations."

But ICE says it has implemented changes to ensure detainee safety. Between 300,000 and 500,000 people are processed into ICE custody each year, and the agency spent over $195 million last fiscal year on medical, mental and dental health care for detainees.

"Another crucial facet of the agency's detention reforms has been the implementation of significant changes to the health care delivery system to ensure that those in ICE custody receive timely access to medical services and treatment. That includes establishing a cadre of Detainee Medical Coordinators who are assigned to each of the agency's field offices to closely monitor complex cases. ICE has also since simplified the process for detainees to receive authorized health care treatments," Pitts O'Keefe said.