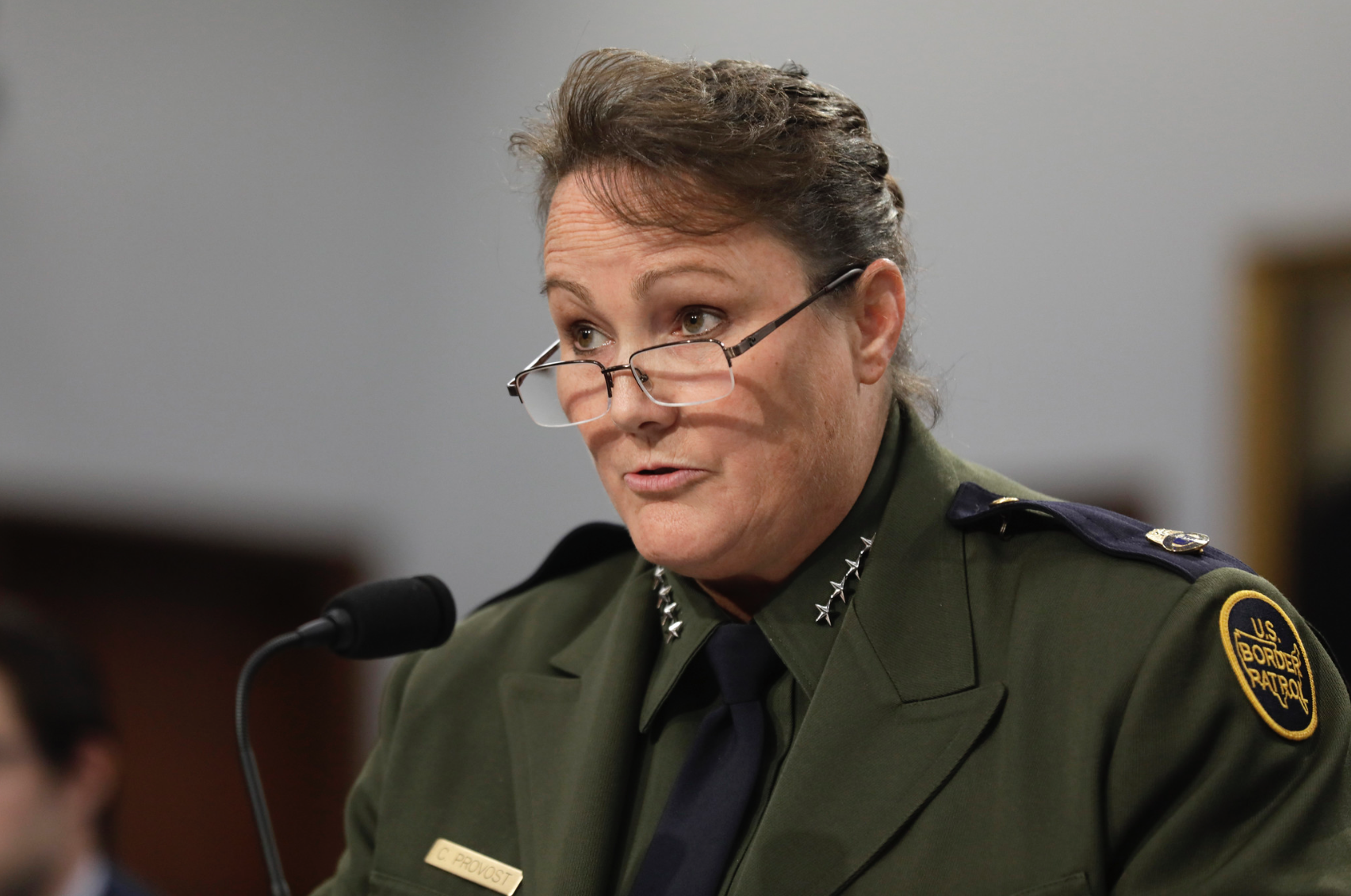 US Border Patrol Chief Carla Provost has announced her long overdue retirement from the agency. She opined that she would like all of us to stop playing politics and come together on immigration. She demands we come over to her side, the side that separates families and treats asylum seekers as criminals. The side that ignores the cries of children in Border Patrol custody who are forced to sit in their own feces for days. The side that through its intentional neglect, has resulted in more in-custody deaths for which the agency has refused to accept any responsibility.

Provost sees none of those things though. She wore blinders so big that they could blot out the sun. She saw only things that made her boss, Trump, happy. If he wanted a wall, then by God so did she. If he wanted to create a crisis by holding asylum seekers indefinitely, he could count on her. If Trump wanted to further militarize and violate people’s rights in our border communities, she was game.

Appointed to Acting Chief in April 2017 and then later to Chief, Provost had many firsts in her nearly three year job as head of the largest, most corrupt, out of control, and unaccountable federal law enforcement agency in the country. The only downside I can see to this sycophant leaving is that the guy taking her place — former San Diego sector chief Ronnie Scott (more on that in a different post) — is much more skilled and adept at fooling the press and playing politics than she ever was.

Carla Provost was the first female Chief of the Border Patrol. I and many other former and current female agents had hopes that she would tell the truth about the Border Patrol’s long history of rape culture towards its women. Sadly, Provost apparently didn’t get appointed because she was a trailblazer, but more because she was a “yes” woman. No, she claimed the Border Patrol had no problem with women. She gave the standard agency talking points on why the agency never pushes more than 5% women: it’s too hard, the terrain is rough, the hours are long and the locations are desolate.

While all of that is true, she failed to mention that when female agents are raped at the academy by fellow agents, the agency often prevents them from filing charges with outside law enforcement. They like to handle it themselves, they say. This is actually an obstruction of justice as the agency has no jurisdiction to investigate or handle such crimes. She failed to address the long tradition of the “Game of Smiles” that existed when both she and I were trainees in the mid 1990’s. In this article, former CBP Internal Affairs Commissioner James Tomsheck talks about how the Border Patrol covered up a well documented case from 2000. And if anyone has any doubt if it continues, you need only remember the Facebook “I’m 10-15” private Border Patrol group that showed a cartoon of Donald Trump playing the game with Rep. Ocasio-Cortez (D-NY). A private group that good old Chief Provost and the new Chief, Rodney Scott, were proud members of.

But let’s not forget that Provost was also the first to violate asylum laws of the US by holding asylum seeking families in her filthy, infested detention centers for indefinite periods of time. The last time a child had died in Border Patrol custody was in 2010. Provost won another first with six kids dying under her leadership, including a two-year-old and a 16-year-old Guatemalan boy named Carlos Hernandez-Vasquez. There’s a video of Carlos’ death, sitting in a Border Patrol cell for hours until he collapses on the floor. Agents were ordered by medical professionals that he needed further attention, yet agents did not find him until over four hours later. When they turned over the video to investigators, those four hours had been suspiciously erased. To date, we still do not know what happened. Many adults — citizens and noncitizens alike — died in custody as well.

Chief Provost will also go down in history as the first Chief who violated the law by separating families as part of the Trump administration’s zero-tolerance policy. Agents charged asylum seekers with illegal entry even though international and US law states that entry without inspection is not to be considered when claiming asylum. They stole their children and sent them all over the country intentionally, not bothering to keep track or have a system for reuniting them. These children suffered trauma from Provost’s orders. Many were sexually assaulted by those who were hired to tend to their needs.

Time and again when Provost was brought before Congress to explain these deaths, to answer for why children were being taken from their parents, for why asylum seekers were being abused in her agents’ custody, Provost responded with outright indignation and called into question the patriotism of those questioning her. She even blamed her self-made crisis on Congress. According to her statements, the Border Patrol agents she knew were some of the most honorable and ethical people she’s ever encountered. They were all heroes without exception in her words.

But do heroes assault people like these agents did: Border Patrol Agent Luis Dominguez of San Antonio, TX, Agent Jason McGilvray of Calexico, CA, Agent Hector Guerrero of Loredo, TX, Agent Gustavo Rodriguez of San Benito, TX, Agent Joseph Blecha of Newport City, VT, and Agent Higinio Rios of Loredo, TX? How about Agent Spencer Cox who was arrested for soliciting sex online from a 16 year old girl in San Antonio? Or Agent Donato Cantu of Laredo, TX, who was arrested for soliciting prostitution? How about Agent Jacob Rodriguez of Port Isabel, TX, and Agent Ricardo Trevino of San Antonio, TX, both arrested for DUI? Or how about Agent Rudy Mora who was also arrested for DUI hit and run in San Antonio? An interesting tidbit about Mora, he was also arrested while an agent in 2014 for choking his girlfriend.

How about those agents arrested for child porn: former Supervisory Agent Jason Davis of New Mexico, Agent Keith Hook of New York, Agent Paul Whipple of Hondo, TX and Agent Vernon Millican? Was Agent David Villarreal of Laredo, TX, a hero when he sexually assaulted a woman and was also charged with tampering with evidence? How about Agent Matthew Bowen of Nogales, AZ, when he used his service vehicle to run over a migrant? Was Agent Steven Holmes of Tucson, AZ, the kind of agent Provost knows and respects? Because he was charged with raping three women. Maybe she’s referring to Supervisory Agent Juan David Ortiz who is known as the serial killer? He murdered four women. All these agents were arrested and charged under Provost’s leadership.

Yet she claims they do not represent the Border Patrol. Not even Assistant Chief Gus Zamora who has been charged recently with sexually assaulting a fellow agent, represents the fine men and women of her Patrol. A man who is married to another chief and has been in the agency for over twenty years. Chief Provost actually allowed Zamora to resign which is against policy. And these are just the easy ones that can be found with a quick Google search. Only Provost knows how many for sure, and she refuses to talk about it. See, to her, to hold bad agents accountable is unpatriotic. Even her own agent and president of the Border Patrol Union, Brandon Judd stated, “Until there is an attitude of accountability within this agency, I think we can expect to see this.”

So, thanks Carla. Thanks for all the death and terror. Thanks for the lies and coverups. Thanks for enabling the racist dialog and further militarization and propaganda surrounding our border communities. Thanks for violating your oath to defend and enforce the laws of this country and the Constitution. Go along your merry way and take a job advising for one of those contractors that supply the agency with expensive toys they really don’t need. We will still be here to clean up after you, to fight for our communities, to see that justice is pursued. You will be remembered as one of our nation’s most violent and corrupt Border Patrol Chiefs ever.