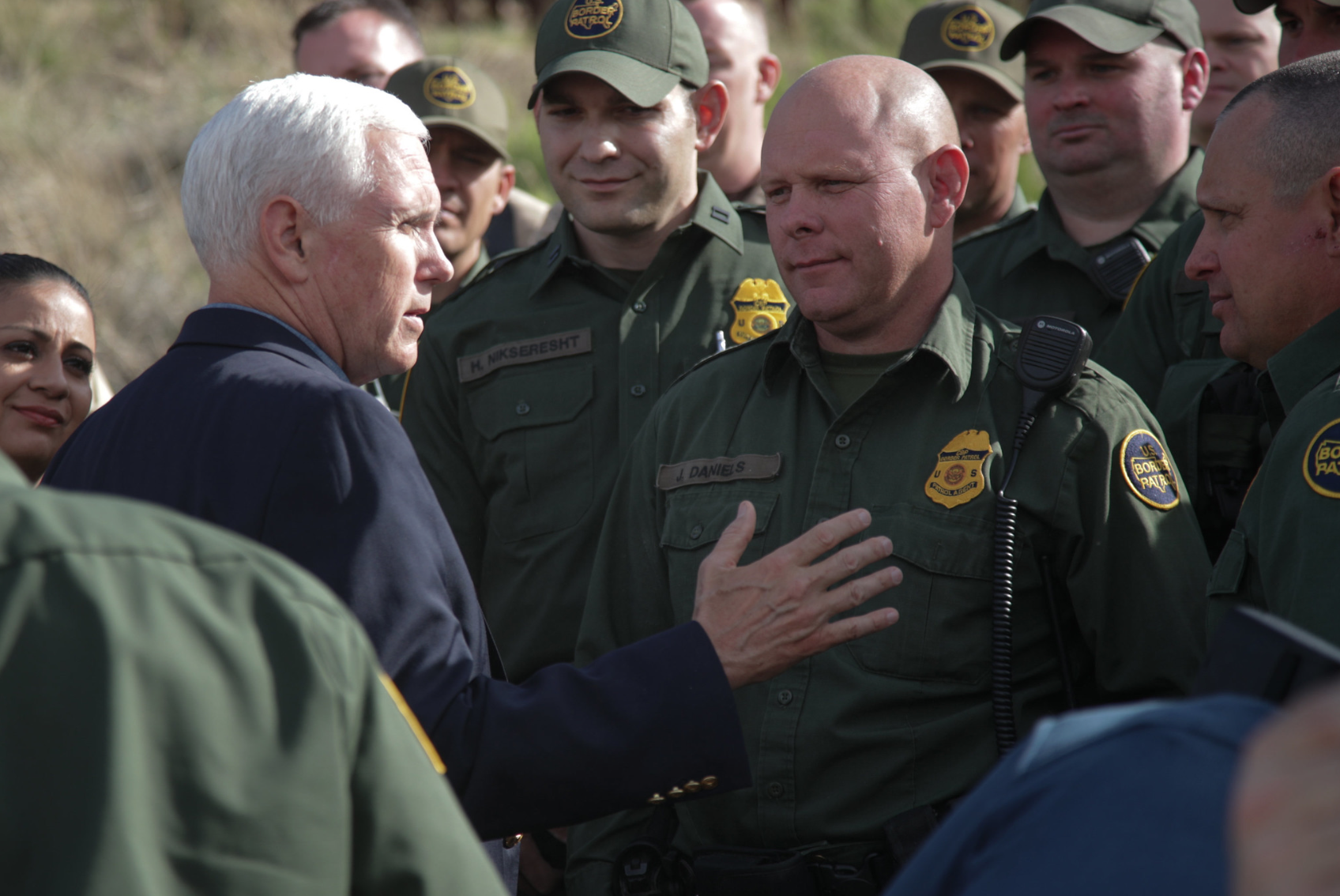 I arrived in El Paso, Texas the day before I was to speak at Reverend Barber's Moral Monday at the Borderlands just one week before the deadly shooting. My first stop was to visit the infamous “dog pound,” an outdoor cage that held men seeking asylum in the hot Texas sun for weeks at a time. I had recently received a picture of families with small children being held in this same cage, languishing in the heat, sitting on the dirt and rocks. I had to see it for myself, but I was too late.

All persons had been removed. They were presumably packed like sardines in the adjacent detention facility, no better off save for being out of the sun. The gate was wide open and I found two Border Patrol vehicles standing guard near the entrance. I did not enter as the sign clearly warned that inside the gate was considered government property. Looking up, I could see a pedestrian bridge spanning from Mexico to the US. This property was right on the border, a paved road separating it from the actual border wall.

The agent was polite when he walked up to me, asking why I was there and if he could help me. I told him I’d seen this place on the news and wanted to know if it really existed. He was Latino and had some years on him. I told him that I didn’t agree with how the Border Patrol was treating asylum seekers. He stated that I did not understand the whole picture and that these “prisoners” were criminals.

“I’m a former Campo Agent,” I said. His mouth opened in shock and he tipped his hat to me in respect. Campo is a notorious Border Patrol station. If you are or were a Campo agent, you are treated with respect as it is the most active, highly physically demanding area in the Patrol. We were known for our signcutting (tracking) abilities and highly revered amongst the other stations.

“When did you all start calling asylum seekers prisoners,” I asked.

He informed me that after 9/11, the agency changed a great deal, something I knew already. The Border Patrol became more militarized, trained as if they were a branch of the military and saw themselves as the first line of defense against “invaders.” A term I knew was used by anti-immigrant hate groups such as The Federation of Americans for Immigration Reform (FAIR) and the now infamous El Paso mass murderer. The Patrol had aligned itself with this group, agents spoke at their conferences and spread its hate-filled rhetoric to its agents through their union website. The term “prisoners” was now being used to help agents not see asylum seekers as people in need but as criminals and prisoners of a long-running war against immigrants.

This agent was no different. He’d bought all the rhetoric, repeated it, lived and breathed it. The only reason for his honesty was my past and his respect for it. I listened as he calmly repeated Border Patrol talking points as if they were facts but had actually come from FAIR, and I thought of how many religious folk simply repeat their minister’s interpretations of the gospel.

I noticed his uniform, though the same green color as the one I’d worn, was now a military-grade style. Tactical pants and shirt with extra pockets usually seen in the armed forces. His badge was a cloth badge instead of the metal one I’d worn, so as to not reflect light. His gun belt was no longer the heavy leather one of my day, but one made of nylon used by swat teams and special forces. Their everyday uniforms were military grade and combat-ready. As if to say to those seeing them, “We are at war and we can do whatever we want.”

The Border Patrol is behaving as if they are a branch of the US military. It is wearing military uniforms, training in military techniques, using military terms. It is absorbing and disseminating propaganda as if it were a military unit. It is holding its “prisoners of war” as a military would. It is ignoring the Constitution and the laws of the United States as if it were in the middle of a war. It is refusing to allow for oversight, refusing to be inspected by outsiders, denying accountability by the press and operating as if it is a top secret agency when it is not.

Words matter, have consequences to them. They help form our behaviours towards each other; they create an environment, an attitude. Attitudes that see asylum seekers as “prisoners” or “subhuman” as Agent Matthew Bowen did. Bowen routinely used such words in texts to other agents. Border Patrol locker room talk if you will. Then he purposefully ran down and hit a Guatemalan man with his service truck and was forced to resign. Nearly the same scenario just played out again in Calexico, CA with another agent forced to resign after hitting a migrant in the face. These agents should have been fired and forced to do prison time, but the Patrol allowed them to resign because that is its culture.

The US Border Patrol is training its agents to be soldiers in this war. A war against migrants, against brown people, against asylum seekers. Be they man, woman or child, the Border Patrol sees these immigrants as criminals, as less than, as “tonks.” This attitude is held from the top (Provost) to the lowest trainee. It is systemic. It is designed this way from everyday Border Patrol speak to everyday Border Patrol actions, from the locker room racist slurs to running migrants down in their service vehicles. This is who they are, who they’ve always been.

I say this as an ex Senior Patrol Agent and an ex Intelligence Agent in the Border Patrol: this agency is a threat to immigrants, American citizens, to our Constitution and our Bill of Rights, and Congress must stop funding it.