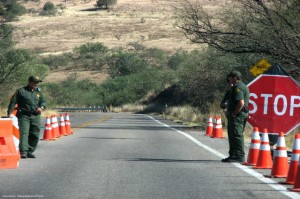 Last month, the National Border Patrol Council — the union representing 16,500 of the Border Patrol’s 21,000 agents — issued a full-throatedendorsement of presidential candidate Donald Trump, who notched another primary victory last night in my fellow border state, New York. So I thought this was as good of a time as any to break down why several statements in NBPC’s endorsement exemplify the agency’s reputation as the nation’s most “out-of-control” law-enforcement agency.

1. “Our own political leaders try to keep us from doing our jobs.”

Since 2005, the Border Patrol has been showered with resources — including $8.4 million to sponsor a NASCAR team — that allowed it to expand its ranks at a breakneck pace. This trend has continued under the Obama administration. Unfortunately, recruitment surges by law enforcement agencies have historically led to — at best — the hiring of unqualified officers and — at worst — widespread misconduct andcorruption. The Border Patrol is no exception.

According to CBP’s former head of internal affairs, thousands of the Border Patrol’s agents are “potentially unfit” to carry a badge and a gun. They are also routinely criticized for their excessive use of force, and then the agency massages the definition of “force” to make that number look smaller than it is. Agents at times fire out of “frustration” rather than out of fear for their own lives, and occasionally those shots hitinnocent victims on the other side of the border, which in most places in the world would be considered an act of war.

In worst-case scenarios, asylum seekers are raped and left for dead.

2. “If we do not secure our borders, American communities will continue to suffer at the hands of gangs, cartels, and violent criminals preying on the innocent.”

The Border Patrol union’s graphic fearmongering offends border residents and mocks crime statistics gathered by another federal agency, the FBI, that consistently demonstrate that border cities are among the safest in the nation. And how about the rhetoric claiming that immigrants who live here are violent criminals? Outright lies fed by xenophobia and hate.

In truth, when Texans in Laredo or El Paso or McAllen fret about threats to their safety, it’s not simply the cartels they have in mind, but the Border Patrol. Residents suffer a multitude of daily indignities at the hands of these forces who occupy rather than protect our communities all across the U.S.-Mexico border, here in Texas and in New Mexico,Arizona, and California too. And while the majority of Border Patrol officers get dispatched to join us in the Southwest, our Northern brothers and sisters are in no way exempt from the same routine indignities perpetrated by these federal law agents, from the East to theWest.

(By the way, if the Border Patrol is so concerned about the threats posed by cartel members? Perhaps it should stop hiring them.)

3. “America has already tried a young, articulate freshman senator … under whose watch criminal cartels have been given the freest border reign ever known.”

The “Deporter in Chief” has always been a staunch ally to the Border Patrol. See the budget chart above. Thirty-five percent of its officers wouldn’t have jobs were it not for Obama’s rapid expansion of this out-of-control police force.

And in the Obama administration’s quest to double-down on border enforcement, it has deported more undocumented immigrants than any administration that preceded it, locked up asylum-seeking Central American women and children in dismal and privately run detention centers as a “deterrent,” and rang in the 2016 New Year by announcing anationwide roundup of undocumented  immigrants.

4. “There is no greater physical or economic threat to Americans than our open border.”

Ask any border resident down here — ranchers, moms, and veteransalike — forced to endure interrogations at the hands of Border Patrol within the sweeping 100-mile zone just how freely we can travel, commute, and move through our homeland. In addition to its 21,000 agents, the Border Patrol also has access to an array of technologies  —including tower radars, underground sensors, infrared sensors, mobile video surveillance systems, and on and on — and in a pinch can even call in air support from U.S. Customs and Border Protection (the agency overseeing them), which boasts an air force the size of Brazil’s.

So for the sake of my fellow border residents at the border, let’s cut through the misinformation and false, political rhetoric: Border Patrol’s excess and tactics have transformed our communities into theaters of war. But for the millions of Americans who live, work, and play here, we don’t have the luxury to exit stage left, nor do we want to. This is our home, marked by safe and tranquil cities, where cultural and economic exchange with our neighbors across the border fuels economies in America’s heartland. (The U.S. Chamber of Commerce agrees.)

The NBPC’s statement reveals yet again its inability to take this into account — not to mention a willful and shameful ignorance of the facts.